Nexrail will focus on providing innovative locomotives for non-electrified lines. 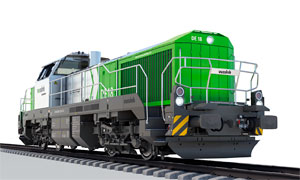 The new company’s first deal is the purchase of a rental pool of 53 shunting locomotives from Vossloh Locomotives, with an average age of less than 5 years. The main types are DE 18, DE 12, G 6 and G 1000. The company will also purchase 50 locomotives

These locomotives will be available from 2023 and will operate in Belgium, Luxembourg, France and Germany. Vossloh Locomotives, based in Kiel, Germany, has been a subsidiary of China Railway Rolling Stock Corporation (CRRC) ZELC, the world’s largest rail transport manufacturer, since 2020. SmartHybrid locomotives are new versatile four-axle locomotives with a mid-cab and an economical 1800 kW diesel engine.

The engine complies with the Stage V emission standards with reduced environmental impact. It also has an optional 144 kW traction battery for up to one hour of emission-free operation. This should result 20-50 percent fuel savings. According to the agreement, Nexrail will be the exclusive supplier of modern locomotives of this type for the Belgian market.

Neil Bennett, Executive Chairman, Nexrail Lease: “Nexrail is already in the midst of plans to roll out sustainable fuel and battery hybrid solutions in all of its markets. This deal with Vossloh Locomotive and the DE 18 Stage V SmartHybrid order for the Benelux market is the first step in our own journey as a lessor. “