The war in Ukraine shows the whole world how important the railway is, which on the one hand provides a very important evacuation of the civilian population, and on the other hand is necessary for the transport of humanitarian goods. 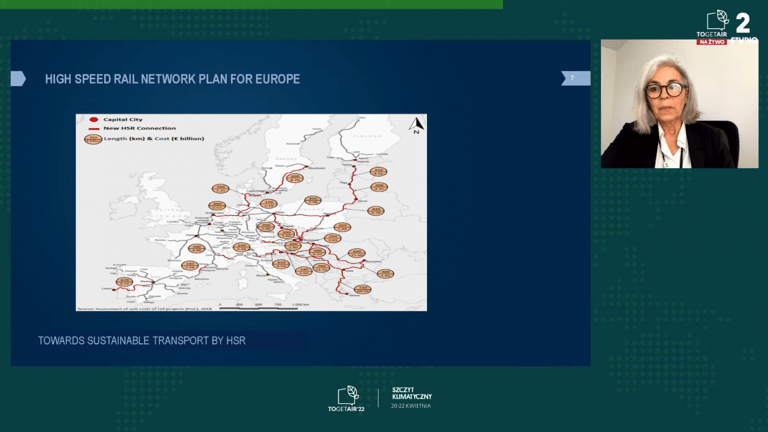 According to a member of the commission in the European Parliament, it is high time to expand the HSR in Europe. This is reported by the railway magazine Railway Supply with reference to nakolei..


Warsaw hosts the ToGetAir’22 climate summit from April 20. During it a panel discussion took place: “The revival of the green railway. Transport goes on the ground”.

In addition to representatives of the Polish railway sector, Dorien Rookmaker, a member of the TRAN (Committee for Transport and Tourism) committee in the European Parliament, took part in the discussion. She pointed to the need to develop high-speed rail to replace air transport for short and medium distances.

There is already more and more talk about the introduction of a ban on flights on these routes, which could be reached by train in a similar or even shorter period (taking into account the check-in time at the airport).

As Dorien Rookmaker notes, the HSR infrastructure network is primarily focused on the national territory.

Thus, there are no HSR connections that could create a coherent network connecting European countries. The committee of the TRAN committee presented a proposal for the development of an infrastructure that would connect the existing routes along which international transport could be carried out.

“We have prepared a plan to fill the gaps that currently exist. The black lines are the existing HSR connections in Europe, and the red lines are the infrastructure that needs to be built in the next 20 or 30 years. This is quite a difficult task, but it is doable. The total investment will be around 140 billion euros.”

According to Rookmaker, this is about 20% of the cost of the economic recovery fund.

Ukrainian railways have proved the reliability of railway transport. From the first hours of the war, railway workers have been continuously evacuating civilians to the west of Ukraine. From there they were transported by trains further, including to Poland. There were days when up to a dozen or so trains could arrive from Ukraine in one day to Przemysl and Chelm. At the same time, trains always depart in the other direction with humanitarian aid.